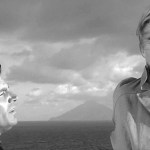 I love cinema, and I am so happy for the opportunity to teach a class of Italian Cinema and Culture this semester. The class is ending now, and the last picture we watched and commented was Antonioni’s L’avventura.

I had watched this movie recently, courtesy of my friend John Olmo, the Chemistry professor and movie expert, but this time I loved the movie even more. It’s definitely one of my most-loved films ever. (I’ve got to produce a list of my most-liked films soon, I promise).

My students loved it too, and we all felt compelled to talk about it after the 140+ minutes (which we had to split in two parts) it lasts. What a wonderful thing a movie can do, having people think and talk and write about it.

I found the movie a lot more sensual than the last time I watched it. And I enjoyed so much the limbo state of the protagonists, who don’t know what they do and why they do it. It was 1960, and I think that ambiguity has stayed with humankind, at least the western part of it. The character Claudia always says she pursues clarity, she’s sort of obsessed by it, and still she won’t find it, and she will in the end accept that frail doubt of her existence, in the memorable last scene of the movie.

My students immediately said they would GIF out the last scene. So I couldn’t resist. I started on a spree and produced the following, all from the trailer (this lazy me).

Splendid Monica Vitti with her character Claudia, a feminine seeker of truth and clarity who, like all the others, is bound to living in anxiety and doubt.

The male protagonist Sandro, played by Gabriele Ferzetti, hides himself after doing something which not even he himself can understand (and neither can we, the ecstatic watchers). Plus, he had lost his fiancée a couple of days earlier.

Lea Massari impersonates Anna, the woman who disappears while on a boat trip on a barren isle within the Aeolian archipelago, just off Sicily. She vanishes but she’s still a protagonist (hello, Hitchcock!)

And this is one of the upscale women who neither knows what she wants, nor is interested in discovering who she is. She just acts, like all the rest. “Acts” like doing stuff, and also like actress-acting. Her character is Patrizia, played by Esmeralda Ruspoli.

The thing I learned after some Web explorations, though, came quite unexpected. I didn’t know the movie, at the Cannes Festival premiere, was booed and laughed at by the public. So much so that Monica Vitti said she felt awful after spending so much energy in the movie. She and all the crew believed in the movie and the world collapsed on them at that screening. What’s interesting is that the day after they received a letter, signed by international journalists and film directors stating that they found it to be the most beautiful film ever presented at the Festival. Also interesting is the public success the film found as soon it was released in theaters. Here is a Monica Vitti interview from those times.

My students liked it and appreciated its tempo lungo, its longish development in which not much actually happens and the mystery is never resolved. Perhaps, like many mysteries of contemporary life and world.

The post An adventure in cinema appeared first on Skate of the web. It’s a new semester, and I began anew my teaching activity. With pride and mostly with a high joy that comes from the attitudes, smiles and interest from my students.

A new course I’ve been working on of late is the new Italian Cinema and Culture (cineitalia.netedu.info), a trip (yeah) in this fantastic territory of the Italian peninsula and its regions as seen through the lenses of its cinema. We’ll explore titles from just after WWII and jump to Naples’ mafia wars; we’ll go from Rossellini and Antonioni to the Giallo of Mario Bava and Dario Argento. And more. But that’s it for today, because today we watched The Great Beauty, the extraordinary film from Paolo Sorrentino (2013). Yes, the same Sorrentino of The Young Pope that aired on HBO.

Students appreciated it. Next Wednesday (Monday is Veteran’s Day here) we’ll host an in-class video critique and dialogue on the movie. The post The Great Beauty of Teaching appeared first on Skate of the web.